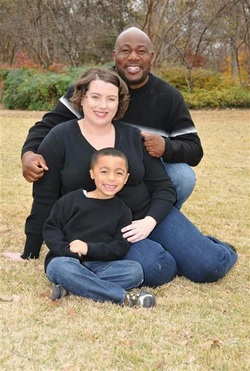 Emily with her husband & son circa 2011
Emily was born in Canada and spent the first few years of her life in Switzerland. Emily's family emigrated to the US and settled in Oregon in the mid-1980's. As a child, Emily kept busy with various performing arts groups, including cello lessons, chamber music ensembles, voice lessons, church choir, school choir, community choirs, and Highland dance lessons and competitions. She graduated from U.S. Grant High School in Portland in 1999.

Emily began Highland dancing in 1989, at the age of 8, with Nancy Mandish in Portland, Oregon. She competed through the Northwest Region from 1990 to 2000, when she traded in her ghillies for an oar, rowing crew during her freshman and sophomore years of college. Emily founded a recreational Highland program while living in Virginia for graduate school and began dancing again herself when her young family relocated to Texas in 2007. In 2009, Emily began working with Fiona Robertson Alpaugh and the Dallas Highland Dancers (DHD), founding and directing the competition program, which boasted nearly two dozen dancers a year later. Emily was honored to serve as the Treasurer of the Southwest Region of the Federation of United States Highland Dancing Teachers and Adjudicators (FUSTA) for the two-year term of 2009-2011. Since returning to the Pacific Northwest, Emily has continued to work as an instructor with the DHD, teaching via live video-conferencing on a regular basis and flying in several times per year to teach classes, as well. Emily is a Highland Member (#19044) of the British Association of Teachers of Dance and an active member of the Northwest Region of FUSTA. She currently serves as Vice President of the Board of Directors and webmaster for the Portland Highland Dance Association (PHDA) and is on the planning committee for the dance competition at the San Antonio Highland Games & Celtic Music Festival (first weekend of April).

Emily earned a Bachelor of Musical Arts, with a cognate in sociology, from Pacific Lutheran University (Tacoma, WA) and a Master of Science in music therapy from Radford University (Radford, VA). Emily is part of a small percentage of board-certified music therapists who hold a graduate degree in music therapy. Emily served her clinical internship at Children's Medical Center, Dallas. As a self-employed music therapist, Emily gained clinical experience working primarily in public school districts throughout the Dallas/Fort Worth area. In 2011, Emily accepted an opportunity to work as the Program Director of the largest music therapy agency in the state of Oregon, and spent the next 18 months commuting from Tacoma to Portland on a weekly basis to do so. She also used her time in Portland to gain more clinical experience, serving a self-contained ED/BD program in a public school district, as well as multiple private clients. Emily is a regular presenter at local music therapy conferences and for various community groups in Oregon and Washington. She is a member of the Music Therapy Association of Washington, the Oregon Association for Music Therapy (of which she is currently serving her second term as Secretary on the Executive Board), and the American Music Therapy Association - Western Region (WRAMTA). She is certified (#08890) by the Certification Board for Music Therapists (CBMT). Emily was trained in Neurologic Music Therapy at the Robert F. Unkefer Academy of Neurologic Music Therapy, maintained at Colorado State University, in October 2011. Emily has also received training in Level I of the Bonny Method of Guided Imagery and Music, as well as Kindermusik.

When she is not pursuing her professional passions, Emily enjoys reading, knitting, sewing, swimming, and spending time with her husband, an elementary school teacher, and their son, who is currently in second grade.
Powered by